Madeline and I moved our living room around so our desks could be up against the blinds in the lightest area. We have our full work setups here. We carried the gear home in a duffle bag and went back a week later for the chairs which, while being amongst the most ergonomic objects I’ve ever touched, rattled like heck as we wheeled them home. 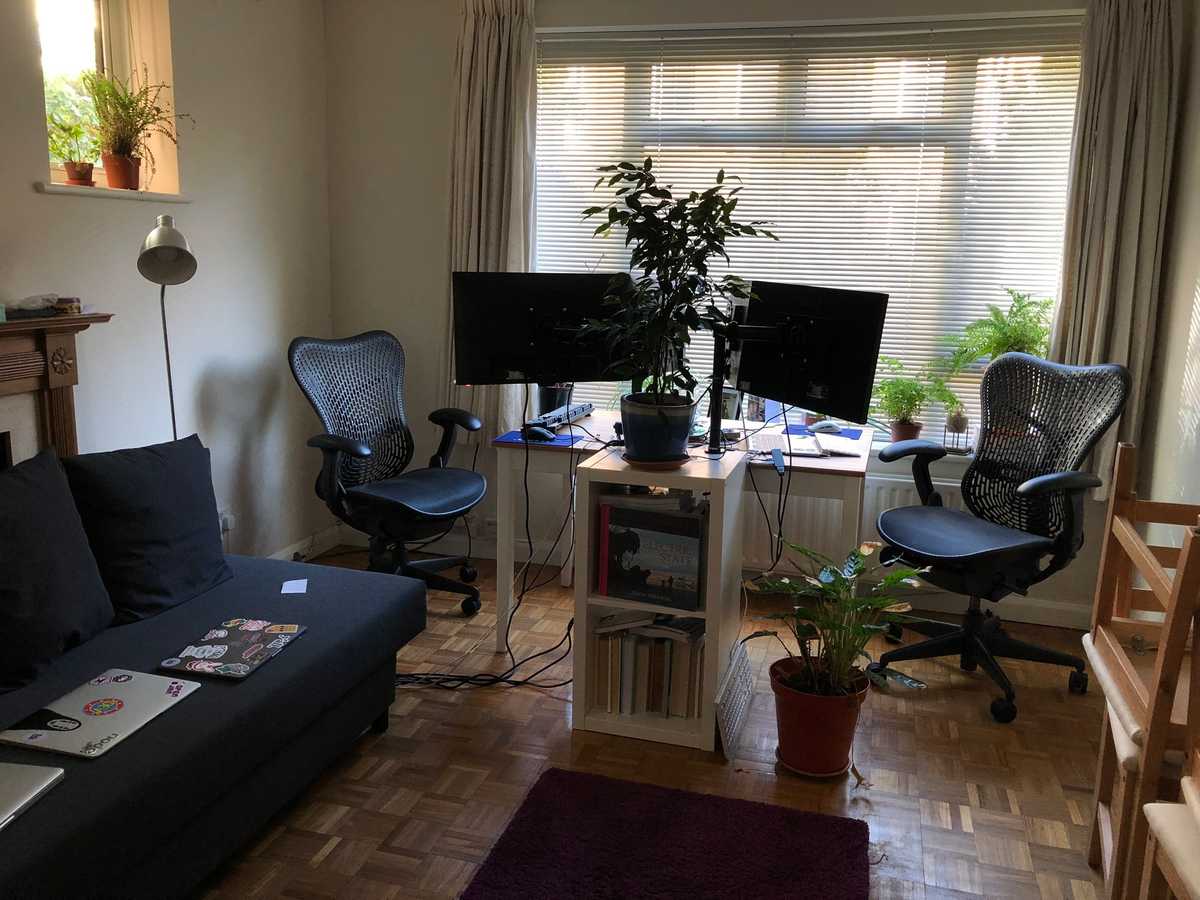 When we have meetings at the same time, one of us normally goes into another room. It depends on how much we’re speaking. When we’re both talking we tend to get louder and louder, without realizing it, until we’re almost shouting.

This is where I listen to lofi hip hop streams and build software and record GIFs to make my pull requests all pretty. My MacBook Pro 2019 is paired with a small £12 bluetooth keyboard because my work keyboard won’t fit comfortably on the kitchen table. 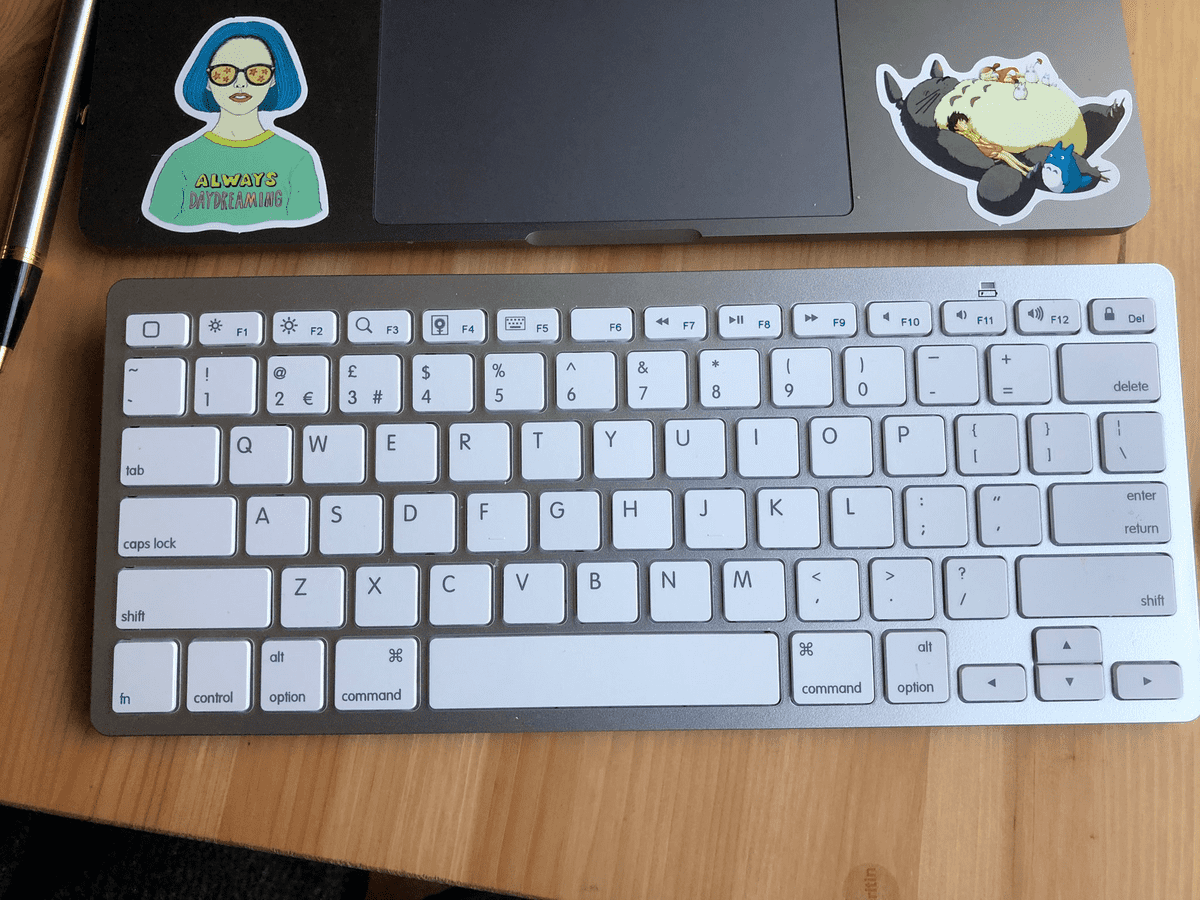 Last week, I was in the other room and Madeline pranked me by turning the brightness and volume up and down on my MacBook via this keyboard (which I had left behind). I was in a casual call with someone at the time and I was describing, while bewildered, all of the weird symptoms until I heard Madeline stifling laughter on the other side of the door.

I spend a lot of time on Slack, Google Hangouts, and Discord. On Slack, my team has a private team channel for work memes and things that relate to the sprint. I find that when working remote, it’s best to have conversations in channels rather than private messages because this shares knowledge and context among the team. Messages in channels are also searchable by the team (even though Slack’s search feature leaves much to be desired). I found that it was worth learning a few Slack shortcuts to increase my productivity e.g. CMD+K to quickly navigate, UP ARROW to edit your last message.

We use Hangouts for our regularly scheduled meetings, all synced by Google Calendar. Hangouts has slightly worse quality than Zoom and seems to use up more battery. Discord has been great for pair programming. The stream feature is being improved almost every day. Discord is better for when I’m working closely with someone on a feature but we only need each other every few minutes. In between these moments we can go silent or just idly chat.

I’ve been quite into videos from a train driver’s point of view. They’re long and uneventful and beautiful. I leave these 12hr streams on my third screen. These videos are often from Norway, where there is the slow television movement.

The usual meeting schedule, and the cadence of our sprints, is the same as before we all went remote. Before, we each worked 1-2 days remotely each week so the transition hasn’t been too bad. I have been trying to be positive and I’ve been looking forward to reviewing our remote practices for when we get back to the office. It’s always been a priority for me to make sure that anyone remote is included fully in discussions and activities at the office.

One trick for connecting the remote person to office life is to let them lead the daily standup while they share their screen (usually viewing the sprint board). This ensures that the remote person understands everything that is going on and feels comfortable asking for clarifications. It ensures that everyone is conscious of the microphone setup at the office too (for when there is one shared microphone e.g. a standup meeting). Alternatively, everyone at the office can dial into the meeting separately to make it a level playing ground. 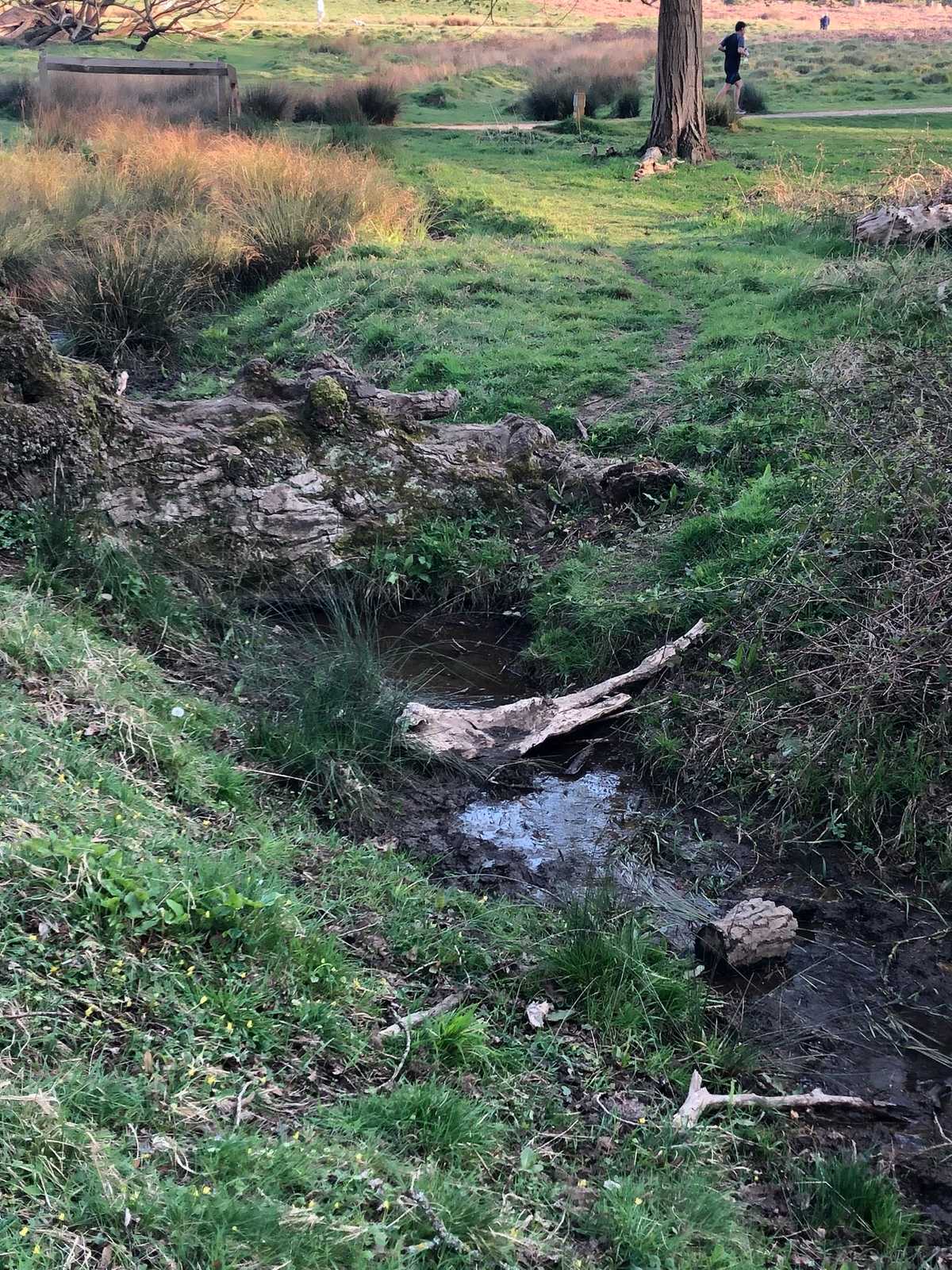 At lunch Madeline and I usually go for runs in Richmond Park. We work hard to keep two meters+ away from people. It’s been beautiful to watch the season change into Summer.

I have been drinking more coffee — cold brew and instant — especially in the mornings. We discovered the joy of barista-style oat milk (shaking the carton plenty before pouring) and it has ruined all other types of oat milk for us! It’s apparently made from liquid oats (I looked it up but still don’t know what it means) which keeps the milk from separating when the coffee is left still.

Deploying code has been scarier while remote. At the office there is always someone around to help with problems even though the way of grabbing them is the same (we message on Slack if someone’s headphones are in). However, the only problem I’ve run into is GitHub being down, which can affect our CI/CD systems. I’m lucky that Madeline works at the same company as me. She’s in a different team but we have been sneaking in some pairing sessions and helping each other out. I’ve learned more about the area that her team works in. Our teams sit a few meters away at the office but our processes are surprisingly different. It’s been fun to learn what works for them and then to take it back to my team. Madeline and I have been speeding up each other’s features by calling out questions across the kitchen table when we’re stuck.

A junior co-worker told me that they are googling more and getting less stuck because they aren’t embarrassed by the idea of other people looking at their screen. I told them that I sometimes barely understand what is happening on my screen let alone anyone else’s screen in the vicinity. They also told me they are learning quicker because they are seeking out help less.

My work tickets lately have been all over the stack, touching a little bit of everything. It’s been fun and keeps things fresh. I hope soon to be able to deep dive into a technology like I did a few months ago when we shipped a Vue.js prototype.

We have a moodboard at the office — a big whiteboard off in one corner with a grid of days and people’s names. We draw pictures, or write words, to describe our days so we can look back in retrospective meetings (once per two-week sprint). Before, when it was rarer to be remote, we sometimes had people describe their moodboard drawings for someone else to quickly sketch up which I enjoyed doing even when my doodles came out goofy. Now, we have moved to a fully remote moodboard with Miro. Which means we can use GIFs! On Miro, you can also see ghost-like cursors, belonging to faraway engineers, move around the shared board.

Our plant growing has extended to things that are consumable. With garlic, onion and spring onion, as well as pak choy, we hope to grow enough to make one meal within lockdown! It is meditative to care for them. I have lost count of the things that are growing in this apartment. And I’m thankful that Madeline is the main waterer. 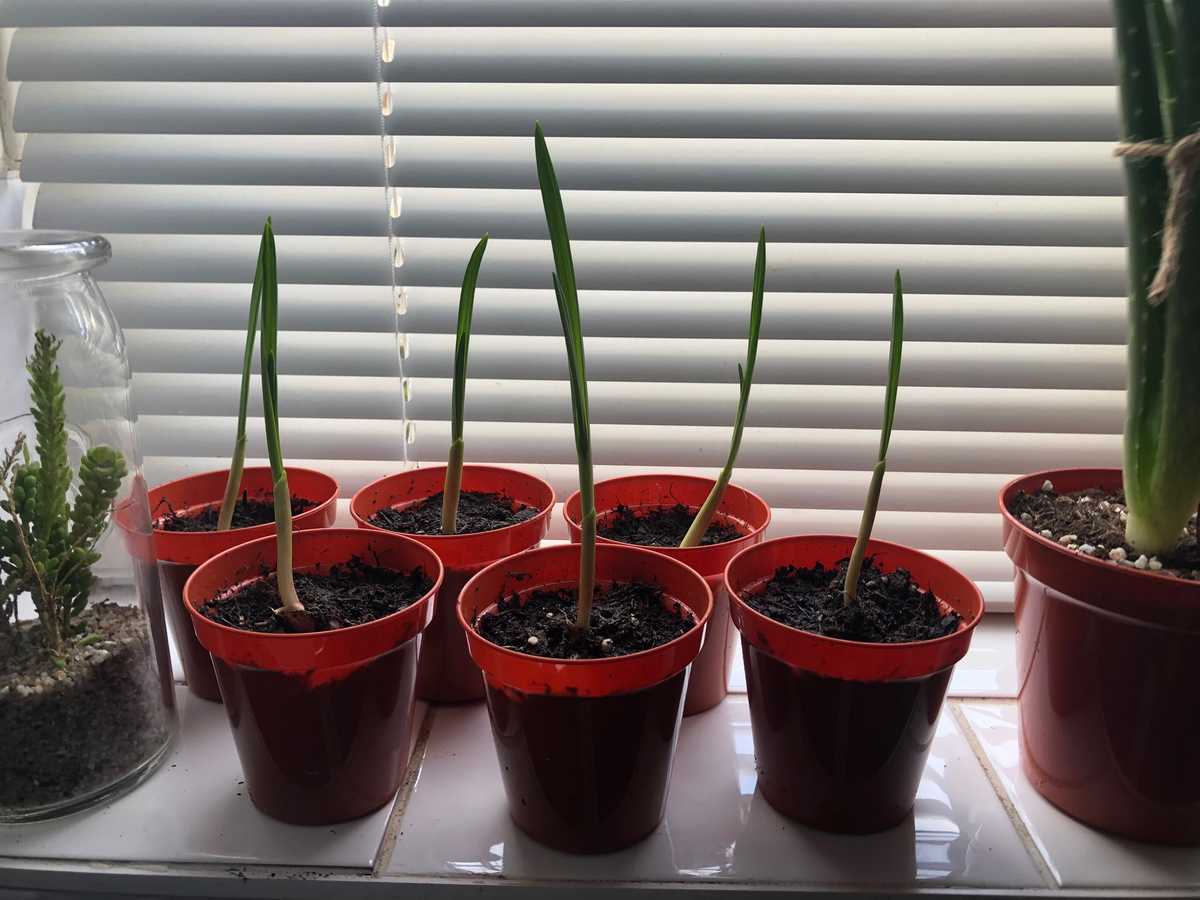 The bi-monthly hackday was held remotely and Madeline and I spun up a QUAKE III: Team Arena server from scratch and deployed it so that we can use it for the #gaming Slack channel at work. We used to have the server hosted on someone’s laptop. Our humorous presentation was about client/server latency and why the person hosting the game had an unfair advantage. We also started building a Vue.js app to help us keep track of goods around the house that we buy on different schedules e.g. kitchen roll, and black bin bags but ran out of time to fully flesh it out.

I’ve been reading more in the evenings. I bought The Electric State by Simon Stålenhag after admiring his art on Twitter. I’ve been reading articles from Lobsters, Hacker News, as well as The New Yorker — I really liked The Friendship That Made Google Huge.