Code golf challenges are not always about writing the shortest code though. Some competitions score on creativeness. Some questions are even just asking is this possible? — and the results are beautiful. Later on, we’ll see a RegEx that only matches itself.

The most common measure for a code golf competition is the amount of bytes the answer requires, generally this can be understood as the number of UTF-8 characters. print('Hello, World!') would be a 22 byte answer. Like golf, the lowest score wins.

For ‘Print every ASCII character your program doesn’t have’, Umbrella is the current leader for JavaScript with 84 bytes — which is relatively long.

GolfScript is quite hard to follow. Most of the time, we write code for humans — not machines. In code golf one writes to score points. The standard programming languages, while often used, can be restrictive. For example, I have never seen a C# or Java answer come top in a shortest-answer-wins challenge.

Much like mainstream programming languages have evolved over time, so have code golfing languages. These languages are designed with different goals. Some want to be able to write the smallest programs. Some are written just because.

Hexagony is a two-dimensional programming language. Let’s take a look at a program that prints ‘Hello, World!‘. You can run this online at tio.run a.k.a. Try It Online — an open source playground of 636 languages.

Intrigued? One of my favorite pieces of code golf writing is the language creator’s description of his primality testing program. Reading about these solutions, and experimenting with my own, exercises my problem-solving muscle. It helps me to learn the edges of my languages.

Similar to the open source community, code golf is often a collaborative effort. Languages are developed in the open, and questions will find helpful answers. Competition ‘entries’ will also receive polite assistance. I remember my first attempt at code golf, I received welcome messages and suggestions for shaving off bytes.

The Programming Puzzles & Code Golf section of StackExchange is the most active code golf community on the internet and this is where you can find many of these languages in use. Esolangs is a community wiki where the most esoteric languages are covered in-depth. The #codegolf tag on Twitter is slow but welcoming.

RegEx that only matches itself

As promised, this post is a fun one. The poster begins by stating that this may well be impossible before elaborating on the challenge. Fortunately, jimmy23013 shows us that not only is this challenge possible but is solvable quite tersely indeed.

Is this number prime?

Let’s start with a Python answer (59 bytes). It’s as naive as prime-checking gets but is creatively short. It demonstrates a typical code golf answer: solve the problem the long way round then apply syntax tricks. (Comments my own).

The leading JavaScript answer is a little harder to pick apart.

The poster tells us that it uses a ‘cool unary regex to determine primality’. Further research found this ~5000 word article which explains said RegEx expression. As you’ve probably started to realize, code golf is like programming in that it’s a rabbit hole that doesn’t end. But it does get more rewarding the further you dive in.

Elsewhere on the web

There’s also the The International Obfuscated C Code Contest which began in 1984. It’s closer to treasure hunting than golf though! Here’s a maze generator entry from 1995, by Carlos Duarte (source): 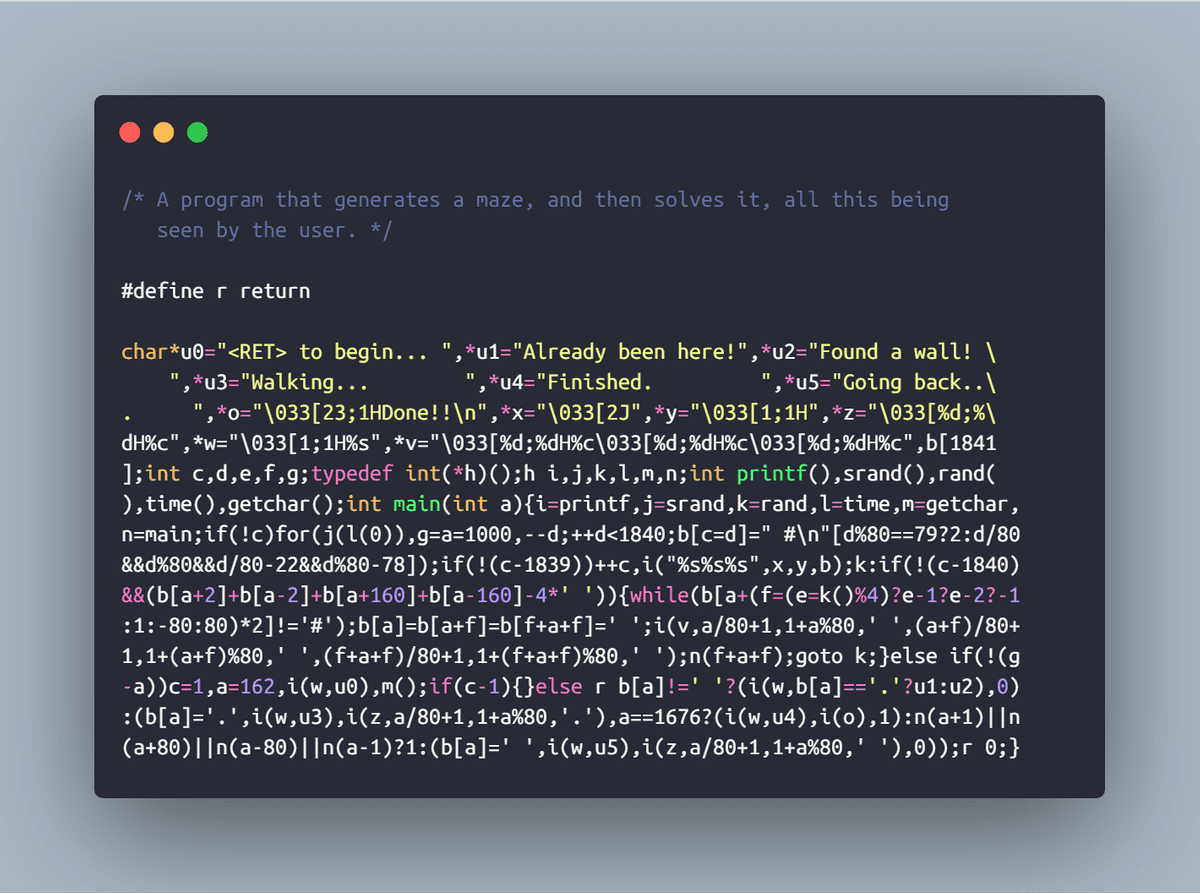 Honorary shoutouts to two of my favorite esolangs 05AB1E and Jelly. They both place well in challenges and are usually accompanied by well-written explanations which are a great entry point for learning them.

Comments or questions? I enjoy talking with readers over email.